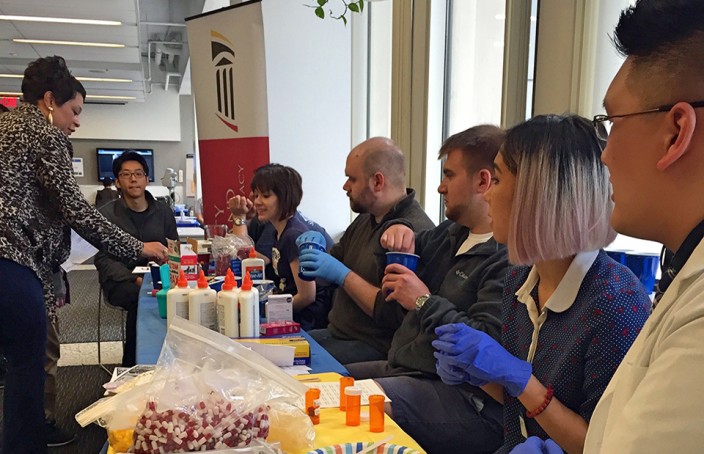 On March 12, the American Association of Pharmaceutical Scientists (AAPS) student chapter at the School of Pharmacy participated in the Career Choice S.T.E.M. Bonanza held at DeVry University in Arlington, Va. Participating in youth outreach events is an integral part of the chapter’s mission to introduce children of all ages to careers in pharmacy and pharmaceutical sciences.

As the vice president of our chapter, I collaborated with Nam Nguyen, a first-year student pharmacist and president and founder of the School’s Industrial Pharmacists Organization (IPhO) student chapter, to help make our presentation even more comprehensive, bringing the unique perspectives and insights of students from the School’s PhD in Pharmaceutical Sciences (PSC) program and Doctor of Pharmacy (PharmD) program together for our demonstrations. Other students who participated in the event included:

Thanks to additional funding from the AAPS Foundation, we were able to make the event even more exciting and interactive for the children who attended, selecting demonstrations that provided opportunities for them to gain hands-on experience making lip balms, slime, and cocoa powder capsules. The three stations were not only designed to be fun and interactive, but also to demonstrate important pharmacy and pharmaceutical science concepts and to highlight career opportunities in the fields of pharmacy and pharmaceutical sciences.

The Cocoa Powder Capsules Station taught students from grades K-12 about compounding pharmacy, labeling of medications, and drug delivery. They were taught about active pharmaceutical ingredients (API) (cocoa powder) and excipients (powdered sugar). After uniformly mixing the API and excipients, the students were challenged to fill different sized capsules using pharmacist compounding techniques.  After successfully completing the activity, they packaged their capsules in their own prescription medicine bottle with proper labeling.

Many of the children that we interacted with were surprised to discover that lip balm is something that can easily be made at home. We educated the students who stopped by our demonstration about the basic chemistry of emulsification, explaining how hydrophobic (“water-hating”) materials such as oils can be mixed with hydrophilic (“water-loving”) materials through the use of an emulsifier to make a consistent mixture, which can then be used as lip balm. This technique is routinely used in pharmacies when preparing creams and lotions. We used Kool-Aid flavoring to alter the color and flavor of the lip balms, which were then packaged in containers that the students could take home.

The most popular of all three stations, the Slime Station really piqued children’s interest. It was used to demonstrate polymer science. Polymers are important materials used to help deliver drugs through our bodies. The demonstration allowed the students to visualize polymer properties and physically play with the material to see how it changed with processing. Polyvinyl acetate (present in liquid glue) was mixed with borax, creating a reaction that cross-links the polymer chains becoming one large flexible polymer. However, as the kids played with (or “processed”) it, the slime stiffened to the consistency of putty.

Lessons Learned for Parents and Children

Overall, the Career Choice S.T.E.M. Bonanza was a great opportunity for graduate students and student pharmacists to come together to collaborate and build relationships for future collaborative work and outreach events. At the end of the event, we found that many of the children who participated in our demonstrations enjoyed the hands-on experiences and were able to see that science can be fun and easy. But, they were not the only ones who walked away with new lessons learned. Their parents also expressed interest in pharmacy careers, to which our volunteers were able to chip in and help them understand the differences between pharmacists and pharmaceutical scientists. Our student pharmacists were also able to help parents better understand the pharmacist’s role as an integral member of the health care team, beyond dispensing medications. 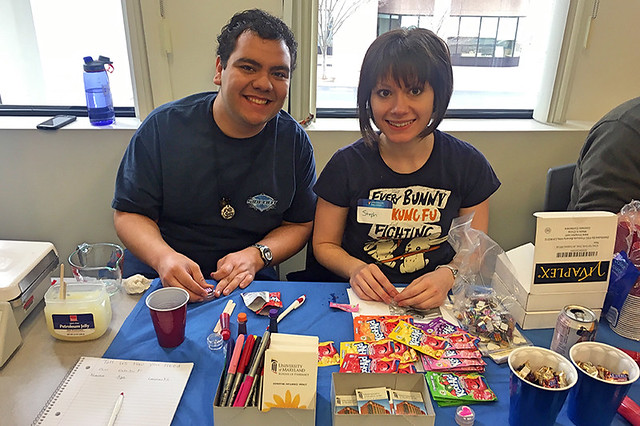