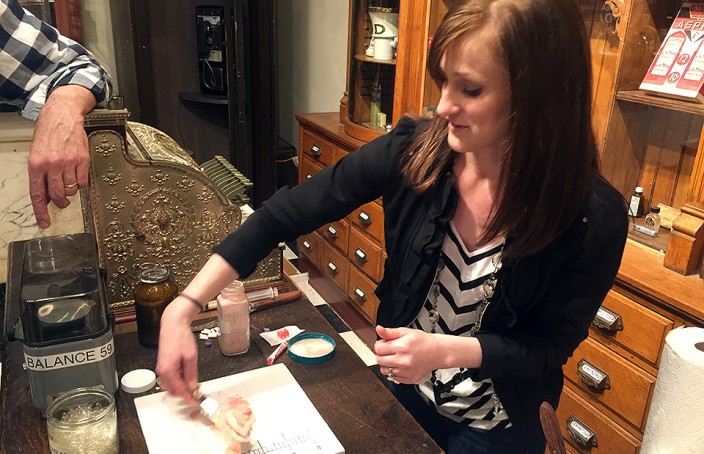 The Baltimore Museum of Industry (BMI) showcases the industrial heritage of Baltimore and the surrounding region through a variety of exhibits, including a cannery, garment loft, machine shop, print shop, and pharmacy.

The pharmacy exhibit — aptly named Dr. Bunting’s Pharmacy in tribute to Dr. George Bunting, a Maryland native and 1899 graduate of the University of Maryland School of Pharmacy, who is credited with developing the formula for Noxzema — contains relics that offer patrons a brief look into the history of pharmacy. On a weekend trip to the museum, Margaret Hayes, the director of student services and outreach at the School of Pharmacy, saw the potential to turn the pharmacy into an interactive exhibit. Working with both the director and the program manager at the BMI, she and I were able to develop a plan to execute this vision. Prior to drug manufacturers and the mass production of medications, compounding was a large component of the practice of pharmacy, so it was fitting to incorporate a live demonstration of different products that can be made.

Breathing New Life into the Exhibit

On Saturday, April 16, I facilitated the first live demonstration of compounding at the museum. Using Smarties, Sweet Tarts, and lactose, I walked visitors through the steps of how to compound capsules, starting with some basic compounding equipment and terminology (i.e. trituration, geometric dilution, and packing the powder bed), and demonstrated the appropriate technique that pharmacists use to get the desired amount of powder into each capsule shell (also known as punching the capsule).  Patrons of the museum then had an opportunity to come up and punch their own capsules, a task that many of them found to be harder than it looked!

After compounding the capsules, I performed a quick demonstration of how to make a pluronic lecithin organogel (PLO), a common delivery system for topical or transdermal medications. PLO is made by combining two ingredients, pluronic and lecithin, both of which start out as a liquid, but, as you mix them together, you can see the product change from a liquid to a solid. The last product that I prepared was a calamine ointment using calamine powder, mineral oil as the levigating agent, and white petrolatum as the ointment base.

Showcasing the Role of the Pharmacist

As the instructor for the compounding portion of the School’s Doctor of Pharmacy (PharmD) curriculum, I was excited by the idea of showcasing these unique skills to the public and discussing how pharmacy has evolved over the years. (Do you know what the columns hanging from the ceiling in the top right corner of the picture below are? Remember back to a time before there were computers and electronic prescriptions, back when all prescriptions were hand-written and manually filed — those columns are one year’s worth of prescriptions from a pharmacy!) I wanted the patrons to learn that pharmacists are not just that person in the white coat behind the counter at their local store taking pills from a large bottle and placing them into a smaller bottle, but instead are part of a continually changing field with the knowledge and expertise that allows them to ensure that each person receives the best medication to treat their condition. 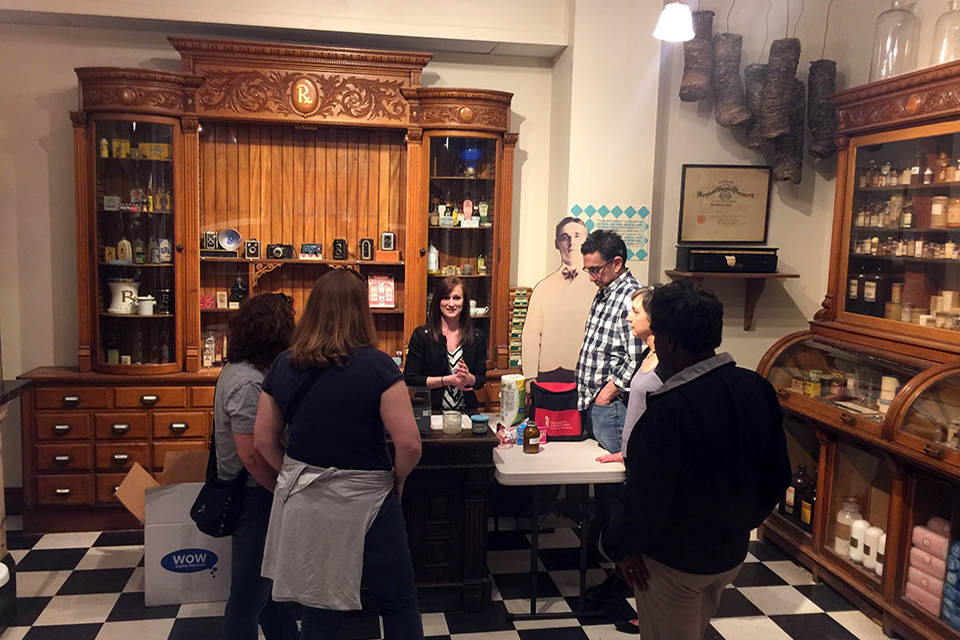