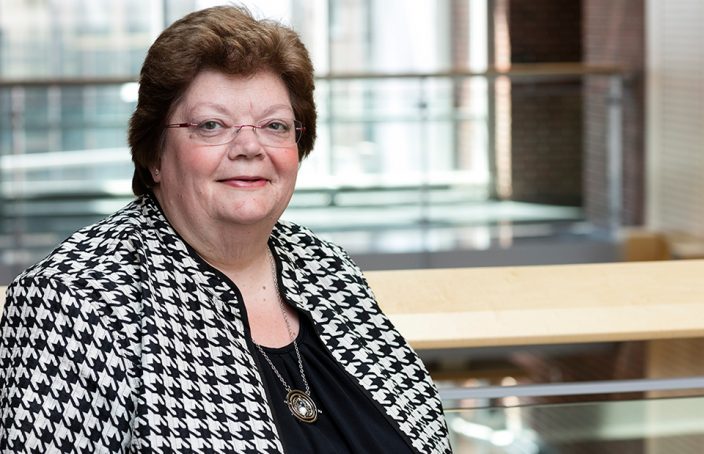 Since joining the faculty at the School of Pharmacy in 1990, Mary Lynn McPherson, PharmD, MA, MDE, BCPS, CPE, professor in the Department of Pharmacy Practice and Science (PPS) and executive director for advanced post-graduate education in palliative care at the School, has gained worldwide recognition for her expertise in the fields of hospice and palliative care pharmacy. Her strong showing at this year’s PAINWeek conference, proved once again why her name has become synonymous with the field.

“Dr. McPherson embodies the School of Pharmacy’s mission to lead pharmacy education, scientific discovery, patient care, and community engagement across the state of Maryland and beyond,” says Jill A. Morgan, PharmD, BCPS, BCPPS, associate professor and chair of PPS. “Despite her extensive teaching commitments in the School’s Doctor of Pharmacy (PharmD) program, PGY-2 Pain and Palliative Care Residency Program, and her recently launched MS in Palliative Care program, Dr. McPherson continues to find time to make an impact in her field through research on both the national and international stage. She is a true powerhouse, and we are fortunate to have her as a member of our department.”

Held Sept. 5-9 at the Cosmopolitan of Las Vegas, PAINWeek is the largest pain conference in the United States for frontline clinicians with an interest in pain management. It is attended by more than 2,000 health care professionals each year, including physicians, physician assistants, nurse practitioners, nurses, pharmacists, hospitalists, and psychologists. While many clinicians who attend present posters and deliver talks, few can match the efforts of McPherson and her team. This year, they presented three posters and delivered eight talks highlighting their current research initiatives.

“The slogan for PAINWeek is ‘education is the best analgesic’ – a philosophy that I have embraced and operationalized since the conference’s inception nearly a decade ago,” says McPherson. “I have participated in PAINWeek each year since it was first established, and watched as participation exploded from the first 50 attendees to, now, more than 2,000 participants, all of whom are hungry for information on how to best treat pain while minimizing risk associated with the realities of practice. Pharmacists have much to contribute to the care of patients coping with pain, while upholding our responsibility to protect those individuals, prescribers, other practitioners, and society as a whole – a concept that I emphasize across all of the work that I share at this event.”

The following is a list of the posters and presentations presented by McPherson and her colleagues at this year’s event: