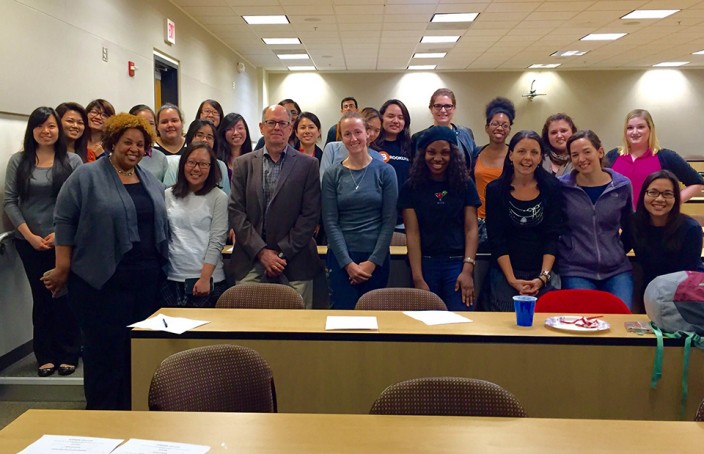 After more than a month of planning, the American Pharmacists Association-Academy of Student Pharmacists’ (APhA-ASP) Operation Immunization at the School of Pharmacy’s Shady Grove campus was thrilled to host a screening of the award-winning documentary Someone You Love: The HPV Epidemic on Nov. 19. We had a great turnout, with more than 30 students from the pharmacy, nursing, public health, and biological sciences programs joining us to view the film, which follows the stories of five women whose lives forever changed when they were diagnosed with human papillomavirus (HPV).

HPV is the most common sexually transmitted infection (STI), with approximately 79 million infected individuals living in the United States. In most cases, the virus goes away on its own without causing any problems. However, if it does not go away, it can have a very negative impact on a person’s health, even contributing to the development of cancers that affect both men and women, such as cervical cancer, which has become a stigmatized illness, as survivors often do not feeling comfortable discussing their battle with the disease. There is a vaccination available to protect against certain strains of HPV, but it remains controversial among parents who are not comfortable having their children vaccinated against a STI. By screening Someone You Love at Shady Grove, we hoped to raise awareness about the silent HPV epidemic currently affecting the country and dispel the myths associated with the HPV vaccine and cervical cancer.

The film, which I was first introduced to by our APhA-ASP chapter advisor Deanna Tran, PharmD, assistant professor in the Department of Pharmacy Practice and Science (PPS), carries a powerful and inspiring message. I heard from many people who attended the screening that they found it to be very emotional and eye-opening to watch as the women fought to overcome cervical cancer caused by HPV, with some surviving and others whose families were left to pick up the pieces after they succumbed to the illness. We were also honored to have one of the women spotlighted in the film – Ms. Tamika Felder – attend the screening and share her experience battling cervical cancer caused by HPV. I believe that having Ms. Felder present at the screening helped to further diminish the senseless stigma attached to cervical cancer.

An Attitude of Gratitude

As future health care professionals, it is our responsibility to help raise awareness about this silent epidemic. This film was instrumental in helping to build empathy among those who attended by showing just how difficult it can be for a family to go through a cancer diagnosis. In the spirit of Thanksgiving, the film screening offered a great opportunity for everyone on the Shady Grove campus to come together and express our gratitude for what we have. In addition, it would not be right for me to conclude this post without expressing my gratitude to Dr. Stephen Taplin, the deputy associate director of the Healthcare Delivery Research Program at the National Cancer Institute. Without his generous personal support, this event would not have been possible. He sponsored the screening that allowed us to share this remarkable film with others and help raise awareness about the devastating impact that HPV can have on a person’s life.