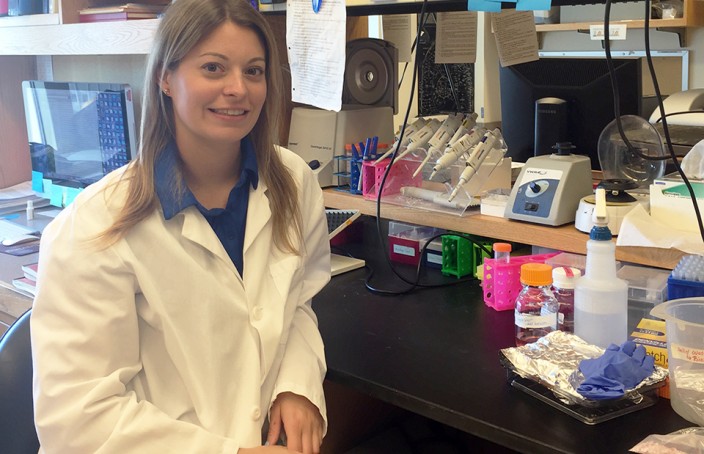 Written By: Lindsay Czuba, Graduate Student in the PhD in Pharmaceutical Sciences Program

When I started my PhD in Pharmaceutical Sciences at the School of Pharmacy four years ago, I thought that I had everything planned out — I’d find a lab with a great mentor, learn new techniques, apply them to a research project, write and publish a few papers, and get a job at a large pharmaceutical company. While my overly simplistic plan may not have been the most naïve one, I never factored in that, just a few years later, I’d be more confused about where to go in my career than I was at the start. Whether with academia, government, a start-up pharmaceutical company, new ventures development, or even management consulting, I had considered nearly every option and found myself drawn to each for their own reasons.

Last fall, I was fortunate to come across an email about the President’s Entrepreneurial Fellowship, which aimed to teach a team of students from the professional schools at the University of Maryland, Baltimore (UMB) the process required to effectively commercialize University-owned intellectual property under the mentorship of Rana Quraishi, PhD, director of New Ventures at UM Ventures – a joint initiative between UMB and the University of Maryland, College Park to commercialize discoveries and create economic impact by engaging partners in industry and social ventures. It seemed like the perfect opportunity to explore my interests in business strategy, start-up companies, and product development. I knew I had to apply. When I found out that I had been chosen to represent the School of Pharmacy on this interdisciplinary team, I was thrilled and confident that I would be able to contribute to the project.

As the inaugural class, we were split into two teams to work on projects related to two separate medical devices. My team included three other members — two doctoral students from molecular medicine and a student from the School of Law. Together, we were assigned to a dental medical device that was invented by faculty members at UMB and College Park. Our first task was to write a draft of a pre-submission Q-submission, which allowed us to ask the Food and Drug Administration (FDA) specific questions about the device, such as the sufficiency of the clinical testing planned for the dental device.

After compiling a rough draft and meeting with an FDA consultant, we found that we had a clear regulatory pathway, and opted in favor of going straight for the Premarket Notification 510(k) to show that our device is as safe and effective as similar devices on the market. As a team, we outlined all of the proposed clinical testing and contacted several contract research organizations (CROs) that could perform the testing for us, as well as companies that could manufacture the device for that testing.

In addition to the regulatory work, we outlined and compiled information for the Maryland Innovation Initiative (MII) Phase Three Application that, if accepted, would award the start-up up to $150,000 to perform the clinical testing and launch the device. This fund was developed between the state of Maryland and five local universities (including UMB) to support university owned start-ups and product development. For this application, I specifically focused on the marketing and competitive advantage that our device had over others on the market.

Overall, this fellowship was a great opportunity. I learned a lot about the work that goes into developing a product from a start-up company’s perspective. I also learned a lot about tech transfer at UMB, and began to understand how members of academia are able to patent and commercialize their findings from the lab. However, the biggest lesson that I took away from the fellowship is that, as an entrepreneur, you can have the best idea in the world, but you need a really motivated team to effectively get a product to the market.