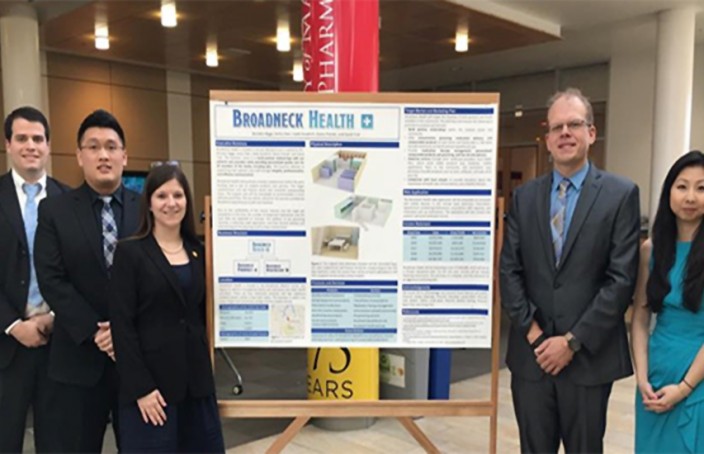 It began in April 2015, at the end of the year banquet for the School of Pharmacy’s student chapter of the National Community Pharmacists Association (NCPA). After a semester of hard work, the students behind a business plan to open a compounding pharmacy focused on pet medications, called Broadneck Pharmacy, waited patiently as the winners of the School’s annual business plan competition were announced. Unfortunately, the night did not end in celebration for the students behind the Broadneck Pharmacy proposal.

Over the summer of 2015, student pharmacists Brandon Biggs, Emily Chen, Caleb Goodrich, Elaine Pranski, and David Tran went back to the drawing board on their plan. A bit defeated at first, and disappointed that the judges did not agree that their business plan would succeed, the group reconvened and sought advice on how they could make their idea better. The team believed they were on to something, but realized that they had weaknesses that needed to be addressed.

Potential entrepreneurs can learn a lot from this team’s journey to build the best business plan for a startup pharmacy. After consulting with faculty and staff to strengthen their plan and implemented lessons learned, the team re-entered the School’s NCPA Business Plan Competition in 2016. This time, a much happier outcome awaited them, as members took home first place and were later announced as one of only three teams that would have the opportunity to present their business plan at the NCPA national meeting in New Orleans on Oct. 15.

The word “entrepreneur” is often mischaracterized, as we tend to think people willing to start their own businesses are risk seekers who are more likely to roll the dice at the casino when the odds are stacked against them for the thrill of the experience. However, research shows that entrepreneurs are not just crazy, cliff-diving, risk seeking, adrenaline junkies, but are quite calculating in how they evaluate risk and identify opportunities where others only see risk.1,2

After losing in 2015, the Broadneck Pharmacy team realized that by entering the 2016 competition they would not only be risking their reputation, but would be risking the heartache that might come if they failed again – a feeling that they knew quite well.

All individuals are inherently biased, as we all experience life a bit differently and see the world through a lens that can’t be perfectly replicated. The entrepreneur must recognize this bias and address it by building a strong team and seeking advice throughout the process.3

The Broadneck Pharmacy team realized their original compounding plan needed to improve, so they reached out to the School’s lead pharmacy compounding instructor, Ashlee Mattingly, PharmD, to serve as their faculty mentor and help strengthen their compounding strategy. The team also enrolled in the School’s new business plan competition elective course taught by Joey Mattingly, PharmD, MBA, assistant professor in the Department of Pharmacy Practice and Science (PPS) and Tim Rocafort, PharmD, BCACP, assistant professor in PPS, to learn the caveats of the business plan process. This helped the team position itself to win the School’s 2016 NCPA Business Plan Competition, which they had lost the previous year. After redeeming themselves in the School’s competition, the team immediately formed an advisory group that included all three of this post’s authors.

A lasting impression that these students have left on the authors and that will hopefully serve as an example for future student entrepreneurs is their ability to handle adversity. Given the number of obstacles faced by a startup company, it is often the entrepreneur’s response to these challenges and demonstrated perseverance that will determine success, and may even be more important than the innovative idea itself.4 We hope that through this experience, our students will understand that creativity is just one ingredient needed to launch a successful business, and that those who wish to see an idea come to fruition are ready to fall down (and pick themselves up) a few times along the way. We feel fortunate to have had this opportunity to work with such a dedicated team of student pharmacists, and wish the Broadneck Pharmacy team good luck in the national competition this October. 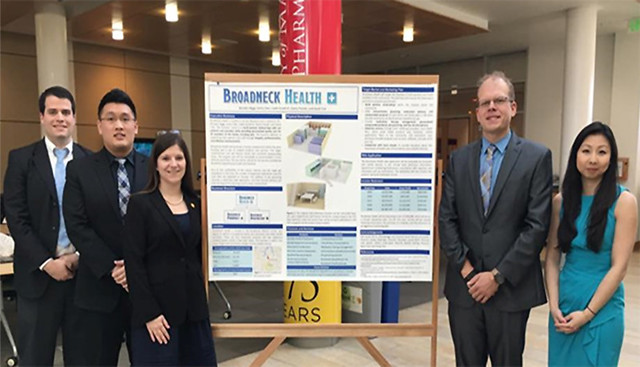