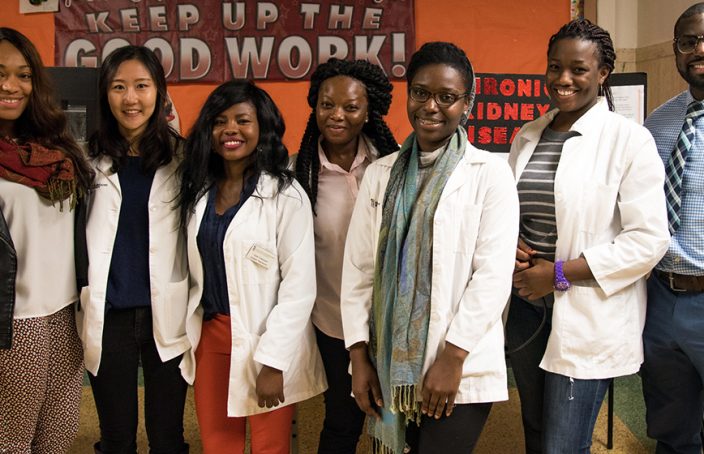 Thanksgiving Day is usually not a popular day for service or giving back to the community. Instead, it’s a day that most people spend celebrating with family and friends. However, for two student organizations at the School of Pharmacy – the American Pharmacists Association-Academy of Student Pharmacists (APhA-ASP) and the Student National Pharmaceutical Association (SNPhA) – the day provided the perfect opportunity to engage with members of the local community and volunteer with the University of Maryland, Baltimore’s (UMB) Project Feast initiative to serve Thanksgiving meals at Booker T. Washington Middle School.

Project Feast is an annual initiative that aims to serve Thanksgiving meals to Baltimore’s homeless residents. In addition to receiving a hot meal, residents who attend are provided with new clothing, toiletries, blankets, and other pantry staples. This year, student organizations from the Schools of Pharmacy, Medicine, and Dentistry volunteered to oversee the event, and we were pleasantly surprised to see one of our professors – Nicole Brandt, PharmD, MBA, BCPP, CGP, FASCP, professor in the Department of Pharmacy Practice and Science and executive director of the School’s Peter Lamy Center on Drug Therapy and Aging – assisting during the event as well. Additional volunteers from the School of Pharmacy included:

On the day of the event, APhA-ASP Operation Diabetes and the International Pharmaceutical Students’ Federation (IPSF) co-managed a table that offered materials to help educate residents about diabetes and diet and nutrition, including how to select beverages and monitor glucose intake. We had a lot of people approach the table, attracted by our demonstration that featured different beverages accompanied by granulated sugar in Ziploc bags to illustrate how much sugar each beverage contained. Some residents with whom we spoke had been diagnosed with diabetes, while others had a friend or family member who was living with the illness. One resident even shared the progress that he had made towards managing his diabetes, admitting that he had given up sodas and now drinks only water. It was helpful having one of our preceptors assist during the event – Kelechi Aguwa, PharmD, manager of Walmart Pharmacy in Towson – as he was able to talk more with that person and provide additional advice about other improvements that he could incorporate into his lifestyle.

SNPhA also managed a table during the event to educate attendees about chronic kidney disease. Dr. Aguwa provided screenings and coordinated patient counseling, while other participants had an opportunity to spin the “Wheel of Education” and answer a question about chronic kidney disease for a chance to win a prize. Many people participated, answered questions, and won prizes. We were very impressed that even children were able to answer the infamous question, “How many kidneys do you have?”

Other events held that day included blood pressure screenings and patient counseling. I had the opportunity to take one resident’s blood pressure after he admitted to never going to the doctor nor taking any medication for his blood pressure. I found his blood pressure to be very high and worrisome, and encouraged him to visit his doctor and get more assistance with stabilizing it. He was very grateful, which reflected in his demeanor. It was an incredibly rewarding experience.

Another volunteer, Akua Preko, shared with me that Project Feast wasn’t just about the food, but also about making community members “feel loved and have a sense of belonging.” She also noted that “a lot of people attended the event and, surprisingly, not all were homeless. Some people came to dine with others they knew or to take part in the additional resources offered that day, but seized the opportunity to socialize with others.” Akua also mentioned that this year was the second time that she met the man who plays his guitar during the event, remarking, “He said it brings him joy to entertain people here because there is no one in his house to share his music with.”

In addition to providing valuable resources for some of the community’s most vulnerable residents, Project Feast was an opportunity for student volunteers to make new friends, as most people were comfortable enough to express how relieved they were that they were not being judged and how they felt that they were in “safe hands” with the students. For more information about how to get involved with Project Feast, please email projectfeastumb@gmail.com.