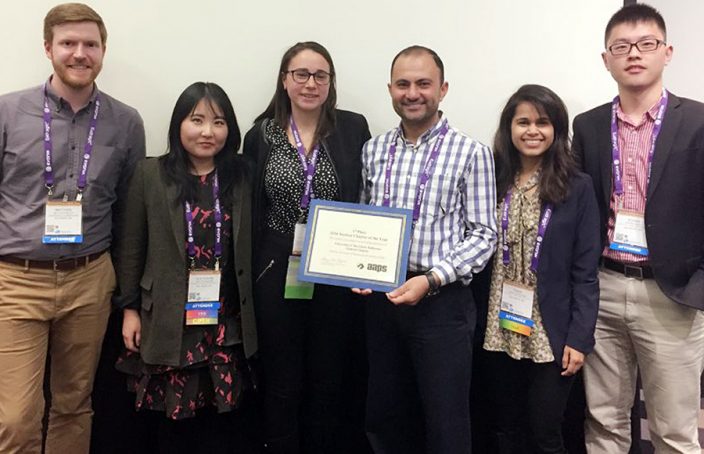 Each year, student chapters of the American Association of Pharmaceutical Sciences (AAPS) that have provided exceptional service and outreach to their members have a chance to be named the organization’s Student Chapter of the Year (SCOTY). There are more than 100 AAPS student chapters around the world, with 36 chapters, including ours at the School of Pharmacy, applying for the award this year. We knew that the selection process was going to be competitive, but we never could have imagined the amount of pride and excitement that we felt when it was announced that our chapter had been awarded first place – our hard work had truly reaped the greatest reward.

Let’s Start at the Beginning

The AAPS student chapter at the School of Pharmacy was established in 1998. We currently have approximately 50 graduate student, postdoctoral fellows, and faculty members who are able to take advantage of our great membership benefits, including:

At the School of Pharmacy, the AAPS student chapter also hosts a distinguished speaker series, through which we invite top scientists to visit our School to deliver talks about cutting-edge topics of interest. We also participate in a wide range of volunteer outreach activities and social events, with many members engaged at the national level who take on volunteer roles with the national AAPS organization, further promoting the School of Pharmacy and developing leadership skills.

An Award Years in the Making

With approximately one-third of the organization’s student chapters vying to be recognized this year, it should come as no surprise that the selection process for the AAPS SCOTY award is very competitive. Each year, those chapters that wish to be considered for the award must submit an extensive outline detailing all of the activities they conducted to make the case for their chapter. The outlines are reviewed by the student and postdoctoral fellow outreach group at AAPS. In 2015, our chapter was recognized with an honorable mention. However, this year, our goal was to take home the top prize – first place. To work toward our goal, we developed a plan earlier this year that focused on activities we could host that would directly influence outreach to current members as well as potential prospective members. It was not easy, and at times the road seemed arduous and complex as we strived to attract the best speakers to visit our School, but we remained dedicated to our mission.

When we found out that our chapter had been named first place for 2016, we were overwhelmed with excitement and shock. It was truly an effort that was years in the making, starting in 2014 with a revision to our chapter’s official missions and objectives and going through 2015, when we used that momentum to establish our chapter as a serious resource for pharmaceutical sciences education and knowledge dissemination. Throughout this process, we met many students from other chapters who were very passionate about AAPS and had done incredible work with their own chapters. We knew just how competitive this award was, and to be recognized as the top performing chapter was a truly humbling honor. We are incredibly grateful to Andrew Coop, PhD, professor in the Department of Pharmaceutical Sciences (PSC) and associate dean for academic affairs at the School of Pharmacy, and Hazem Hassan, PhD, RPh, assistant professor in PSC and faculty advisor for the School’s AAPS student chapter, for all of the guidance and support that they offered us throughout this process.

A Glimpse into the Future

It is our hope that this prestigious recognition will bring more awareness to our chapter’s mission as well as the important work that we continue to pursue. Our goal has always been to highlight the School of Pharmacy as a top school for pharmaceutical research, and we believe that this recognition will continue to draw positive attention to our School from prospective employers, as well as continue to attract top speakers from the AAPS community to the School. However, perhaps most importantly, we hope this award inspires students across the School to get involved with AAPS. It’s truly a misnomer that AAPS exists only for people who work in formulation and drug delivery. In fact, with multiple sections and focus groups that span a wide range of topics in the field of pharmaceutics, AAPS can be a home for anyone who has a passion and interest in the drug development process. By winning this award, we hope that all students, staff, and faculty will become proud members of our student chapter.