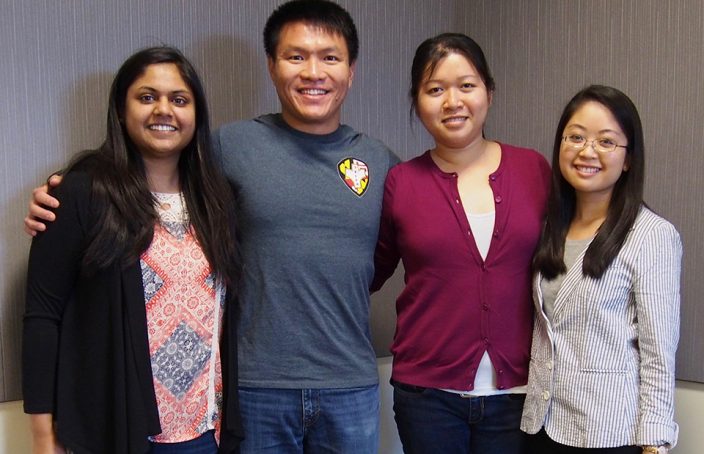 As a student pharmacist, I know that one of the most important, yet modifiable risk factors for heart disease — the leading cause of death in the United States — is an unhealthy diet. Fortunately, I grew up with parents who were pretty health conscious. Although my parents occasionally bought snacks such as cookies and chips for my brother and me, there was never a soda in the house nor was there an expectation of dessert after dinner. Our lives were all about balance. Most of our meals were cooked at home, and included a lot of lean protein, veggies, and whole grains. Yet, I never felt deprived. My parents made it easy for me to eat healthy because — simply put — the food that they cooked tasted really good.

The idea that — with a little bit of creativity — “healthy” and “tasty” do not have to be mutually exclusive terms is the message that members of the Student Section of the Maryland Public Health Association (SMdPHA), Students Engaged in Public Health (SEIPH), and American Pharmacists Association-Academy of Student Pharmacists (APhA-ASP) Operation Diabetes wanted to share with faculty and students at the Universities at Shady Grove (USG) when we co-sponsored the first-ever “So You Think You Can Cook (Healthy!)” competition.

Bringing the Competition to Life

I first pitched the idea for the “So You Think You Can Cook (Healthy!)” competition to Margaret Hayes, MS, director of student educational services and outreach at the School of Pharmacy and SMdPHA’s faculty advisor. She encouraged me to put together a team to help me plan and execute it. The core members of my team included:

We put our heads together and developed a plan to execute the competition. It took a lot of hard work and patience, but we saw it through. We sought recipe submissions from students, staff, and faculty at USG. For those recipes that we approved, we asked contestants to cook their dish at home and bring it to campus on Oct. 29, when we held the tasting event. Everyone at USG was invited to participate in this event, sample each dish, and rate it based on taste.

Taste accounted for 50 percent of each contestant’s total score. The remaining half of the score was based on the dish’s nutritional value. Michael devised a scoring system based on an average 2,200 calorie diet, which falls between the estimated calorie requirements published by the U.S. Department of Agriculture (USDA) for sedentary males and females ages 21-25. The system also incorporated recommendations from MyPlate, a nutrition guide published by the USDA that emphasizes a healthy diet filled with fruits, veggies, protein, whole grains, and low-fat or fat free dairy. It also stresses the importance of limiting saturated fat, sodium, and added sugars.

Revealing the Master Chefs Among Us

The tasting event had an amazing turnout that truly exceeded all of our expectations. Word of mouth, not to mention the wonderful smells, drew people from all across campus to Building III for the event. We heard great things about each of the eleven dishes, but it was ultimately Sumaiya Latif and Timothy Yu from the University of Maryland, Eastern Shore who took home first place for their excellent balsamic glazed chicken dish. Second and third place went to the School of Pharmacy’s own third-year student pharmacists Erika Saunders and Heather Kirwan for their Japanese-inspired noodle salad and honey chicken kabobs, respectively.

All of the recipes from the 2016 “So You Think You Can Cook (Healthy!)” competition can be found in the cookbook that we created based on the event. We hope you enjoy the cookbook and become inspired to make healthier food choices every day.