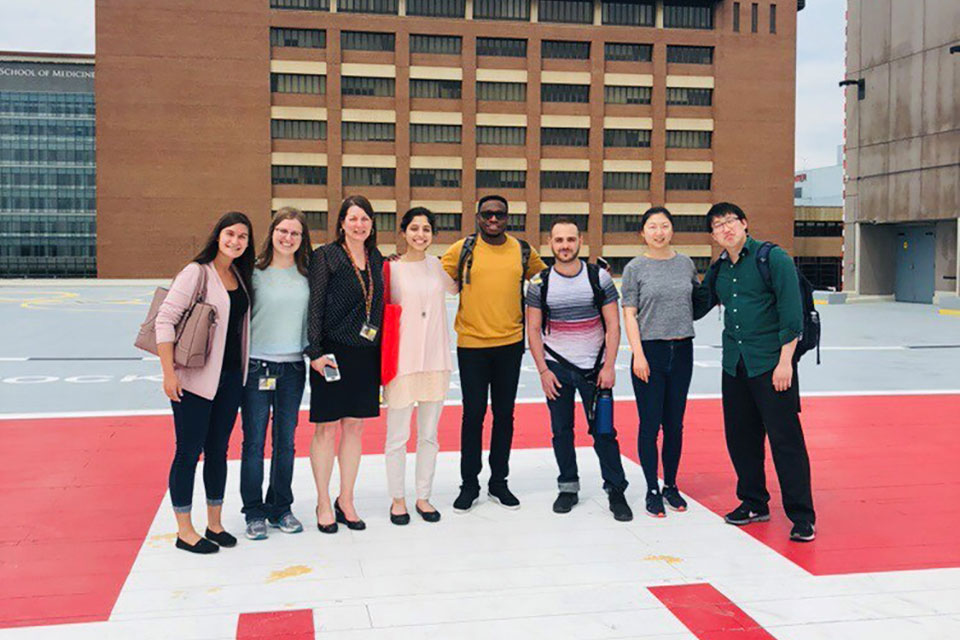 Touring the University of Maryland Medical Center (UMMC) was one of the most interesting and informative experiences I have ever participated in. Richie Stever, CHFM, CLSS-HC, director of operations and maintenance for UMMC, took my class of seven people and our professor — Agnes Ann Feemster, PharmD, BCPS, assistant professor in the Department of Pharmacy Practice and Science and assistant dean for the Experiential Learning Program at the School of Pharmacy — on an hour and a half tour that I will never forget.

An Ordinary Elective Leads to an Extraordinary Experience

I am currently a third-year student pharmacist at the School of Pharmacy, and I just finished my health-system pharmacy practice elective. I initially chose this elective to fulfill a requirement for my Doctor of Pharmacy (PharmD) degree, but it ended up being one of my favorite classes in pharmacy school. Throughout this course, we had many different individuals come speak to our class and tell us about the ins and outs of hospital operations and how the pharmacy team is involved. We also were able to go on a few tours of different hospital systems, but those tours were limited to just the pharmacy. As the course progressed, Dr. Feemster asked our class if we would be interested in a “behind the scenes” type tour at UMMC, and of course, we were more than interested. She was able to set up our tour two days before class ended for the semester.

Our tour started with Mr. Stever asking us if there was anything in the hospital that we would like to see. Naturally, a few of us requested to see the helicopter pad, which is a feature unique to UMMC’s R Adams Cowley Shock Trauma Center. We went all the way to the top floor of the hospital — much higher than most people might care to go — and were greeted by two vast helicopter pads. We were able to walk around on the roof and learn more about the logistics of the pads. We learned that, in the “old days,” when there was snow on the pad, they had to manually shovel the snow so the helicopters could land and safely transfer patients. Nowadays, they have a glycol solution that gets distributed under the pad by a tubing system that melts the snow and prevents buildup. Talk about innovation!

Another fun fact that we learned is that the hospital was actually built from the top down, rather than the traditional bottom up. The entire section of hospital located directly below the helipad is supported by the concrete slab that makes up the landing site. As we were out on the pad enjoying the view, we got word from security that there was a landing expected in just a few minutes. Once safely out of the way, Mr. Stever said we were one of only a few lucky tours that actually got to see a helicopter land, and it was an awesome sight!

More “Behind the Scenes” Adventures

Following our tour of the helicopter pad, we were taken to one of the main power rooms that serves as the source of a majority of the hospital’s power supply. Individual power boxes lined a massive room, and all had separate switches on them that could be lifesaving. Those switches can tell when the normal supply of power is cut, and they send alerts to the generators (which are unimaginably large) to turn on. These generators can begin to provide power within 10 seconds. Close to this room, we also were able to see one of the giant air conditioners that cool the building. Imagine the size of an average camper that you might take on a weekend trip. Now, imagine another camper stacked on top of it. That’s how big this air conditioner was. And, it wasn’t the only one in the hospital. More than 50 of these enormous machines cool every area of the hospital!

Our next adventure was onto another roof, which led us inside to a small rafter-like walkway where we could look down at the atrium from above. Mr. Stever pointed to a small bulb in the corner and asked one of us to cover it up with our hands. One brave student clasped his hands around the bulb, and to our amazement all of the lights in the atrium lit up. This bulb was a sensor that was responsible for controlling all of the ambient lighting in the atrium based on the amount of light coming into the building from the sky. There was only one sensor for the entire area — way up in the corner where almost nobody would know it exists. It was really cool to see technology that I didn’t know was utilized in the hospital play such a large role without others even thinking twice about it.

One of the last areas we toured was Mr. Stever’s favorite room — the hospital’s pneumatic tube room. You know the tubing at your bank drive-thru that delivers your receipt and lollipop? Well, the hospital uses a very similar system to transport important items like blood samples and medication. In total, they have more than six miles of tubing that comprise the entire system. Walking into the room, I had to duck and dodge various winding tubes, and every once in a while, you could hear items rushing past in them. The tubes operate on a switchboard, much like a train track, that rotates and redirects the contents of the container to where it needs to go.

A New Appreciation for All That We Can’t See

Throughout the tour, I couldn’t stop thinking about all of the work that goes on behind the scenes to help the hospital operate smoothly and serve patients and their families. It’s easy to see the physicians, nurses, and staff running around and working hard to serve everyone who walks through the hospital’s doors, but most people would never recognize all of the mechanical elements that must be set in place to make the magic happen, and happen quickly. Who would ever think about the process required to make steam or cool water, or even turn lights on and off? This experience made me appreciate how much work and planning goes into building and operating a large medical facility like UMMC, and I feel incredibly fortunate that I had the chance to experience the hard work that goes on behind the scenes.