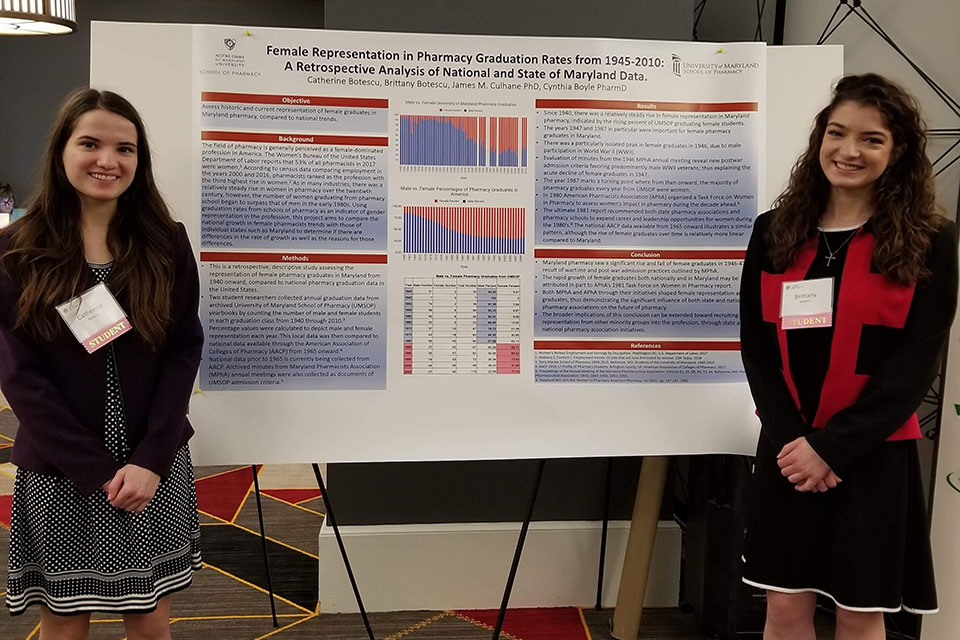 It was a day trip to Colonial Williamsburg – during which I expected to learn about our country’s history – that I realized how much there is to learn about the history of the pharmacy profession. My twin sister and best friend Brittany, who is a third-year student pharmacist at Notre Dame of Maryland University School of Pharmacy, shares many of my interests, including history and pharmacy. As we walked down the streets of Williamsburg, we stumbled upon the town’s apothecary. Looking through the windows of the apothecary we couldn’t help but imagine what it was like to be a pharmacist in those times.

As we began to think about how the profession of pharmacy has changed throughout the history of our country, we started to wonder where we fit into the story. How have women historically been represented in Maryland pharmacy? Established in 1841, the University of Maryland School of Pharmacy (UMSOP) is the fourth oldest school of pharmacy in the United States, so we knew there had to be a story to tell about the School’s history and female representation. I reached out to Cynthia Boyle, PharmD, FAPhA, FNAP, FASCP, professor in the Department of Pharmacy Practice and Science (PPS) at UMSOP, and Brittany reached out to James Culhane, PhD, assistant dean for student affairs at Notre Dame of Maryland University School of Pharmacy, and together we began working on a special project that allowed us to explore this history using archived resources available through our Health Sciences and Human Services Library at the University of Maryland, Baltimore (UMB).

Today, the profession of pharmacy in the United States is generally perceived to be female dominated. However, this was not always the case. Using our library resources, including archived UMSOP yearbooks, Brittany and I collected annual pharmacy graduation data from 1940 to 2010. From this, we were able to determine male and female student breakdowns in each graduating class. Beginning in 1987, more women graduated from UMSOP than men – a trend that continues to this day. But one question remained: why then? Further research led us to learn that both state and national pharmacy associations played a vital role in this demographic shift.

In 1980, the American Pharmacists Association (APhA) organized its Task Force on Women in Pharmacy to assess women’s potential impact on pharmacy in the decade ahead. The final report recommended state pharmacy associations and pharmacy schools increase leadership and career opportunities for women moving forward. But, this wasn’t the first time we saw a pharmacy association influence the profession’s demographics.

Through the library, we also found archived minutes from the Maryland Pharmacists Association’s (MPhA) annual meetings, which provided great insight on demographic changes in the 1940s related to World War II. At the 1946 session, it was noted that UMSOP’s admission priorities would rank World War II veterans as first, followed by experienced drug store employees. Individuals with exceptional grades were ranked last. Before 1947, UMSOP actually saw an increase in female graduates due to most men fighting overseas during the war. These new priorities, which indirectly favored men, explain the male dominated field we saw from 1947 onward. It was fascinating to see how the culture and events of the time influenced female representation in Maryland pharmacy.

In February, Brittany and I had the opportunity to present our research at the MPhA Midyear Meeting. This experience was incredibly rewarding for many reasons. First, we were able to share our findings with dozens of practicing Maryland pharmacists, and discuss the current direction of pharmacy in our state. But also, since many of the pharmacists who attended the meeting were UMSOP alumni, they really enjoyed seeing where their graduation class fit into the larger picture of Maryland pharmacy demographics.

Getting to work on a special project with my twin sister meant that I had the best group project partner ever, and being able to showcase our work together is an experience I will always cherish.